The market forces are there for Australia’s wind and solar sector. Focus must shift to facilitating supply across all the states and territories. Our panel session brought together developer, manufacturer, regulator and our grid expert to discuss the country’s electricity transition and key roles, challenges and technologies ahead.

Monday 7 September 2020 was an auspicious day for Australian renewable energy. As the power went on nationwide, wind and solar technology delivered 50.4% of total generation. The makeup of the Australian energy grid is drastically changing. Its evolution is down to three factors: lower clean energy technology costs – it is now cheaper to produce a megawatt from photovoltaic (PV) solar panels or wind turbines than from thermal plants; increasing consumer preferences for renewables; and government plans to transition to a renewable grid as part of a low-carbon economy vision. AEMO’s 2020 Integrated System Plan (ISP) for the Australian National Electricity Market indicates that, by 2035, renewable energy could meet almost 90% of network demand. This is an astonishing leap looking at today’s market, with coal and gas supplying over three quarters of requirements. But the boom driving the country’s rapid decarbonisation, notably recent jumps in solar (large-scale and rooftop PV), could grind to a halt if the grid infrastructure cannot cope. Australia’s low-carbon future is at a critical point.

Connecting to the grid tomorrow

Grid connection was an afterthought in the early 2000s. As wind farm projects took off in Australia, focus was on gaining community acceptance and planning approval. The nascent sector demanded far less of the grid infrastructure, supplying a small percentage of energy. That figure is now ten-fold and growing. As the market runs ahead of policy, grid connection is a real project risk. This concern will become ever-challenging unless network and power systems – the remit of non-market mechanisms – evolve alongside generation technology.

Transitioning to a network served mainly by renewables was never going to be a plug-and-play option. Existing systems are not designed to accommodate clean energy sources that move away from large generation in discrete geographic centres to new operational models.

Integrating new grid infrastructure is complex as generation technology shifts from traditional sources, based on mechanical principles, to new technologies that work essentially like electronic appliances. Tackling the loss of mass inertia with renewables is fundamental. Our panel looked at two solutions to strengthen grids in the absence of traditional generation: synchronous condensers (SCs) and grid-forming inverter technology. The former is already proven to provide inertia and deliver short-circuit and reactive power for dynamic loads (look at Denmark, for example), but at the expense of added capital and maintenance costs. Grid-forming technology is emerging to support the operation of AC power systems under usual, disturbed and emergency conditions without the need for SCs. Here, ‘grid-forming’ controls enable wind and solar inverters to provide voltage and frequency stability similar to traditional generators. This technology, still being defined, may be a game-changer, eliminating the operation and maintenance costs of SCs with the potential dividend of connecting up to storage to amplify arbitrage. What about existing technology? The possibility of repurposing transmission lines and other equipment from closing thermal plants – a US perspective – was raised where the right conditions come together. Expanding energy storage, using either batteries or a pumped hydro system, was also discussed. This new quasi-industry is set to radically transform how we use energy and more of our natural resources.

Technological advancement is not possible alone; it is not just the remit of innovative manufacturers. The panel session highlighted the developer’s role in driving future generating systems forward too. Consultants such as Vysus Group will also be key from both a technological and commercial perspective, helping industry make swift progress.

Mapping out the potential pitfalls

AEMO’s systems operator role is evolving with regard to security. The regulator’s future energy systems team has been exploring what could limit delivering more renewable megawatts to consumers (see supporting chart).

At current renewable levels (24.9% on a 12-month average basis), the sector is already facing solar challenges, namely disconnections during faults and disturbances. Additionally, there are issues with plant dispatchability, especially in emergency or abnormal conditions (including low-load scenarios experienced in pandemic times). At 50% market penetration, variability and uncertainty in the supply-demand balance become stumbling blocks. Prior to 50%, variability is primarily driven by the load itself. As the percentage rises, coincidental ramps in wind and solar are a greater determining factor. While sophisticated forecasting can help in covering these ramps, it is not the full answer, demanding greater flexibility in the generation fleet. If renewables are to approach 75% of total energy generation, speed of frequency controls is key for system security as traditional inertia sources are displaced with new system dynamics. In short, there is plenty to work through to match the energy contribution of coal and gas today. An industry action plan (early 2021) will build on AEMO’s Renewable Integration Study. 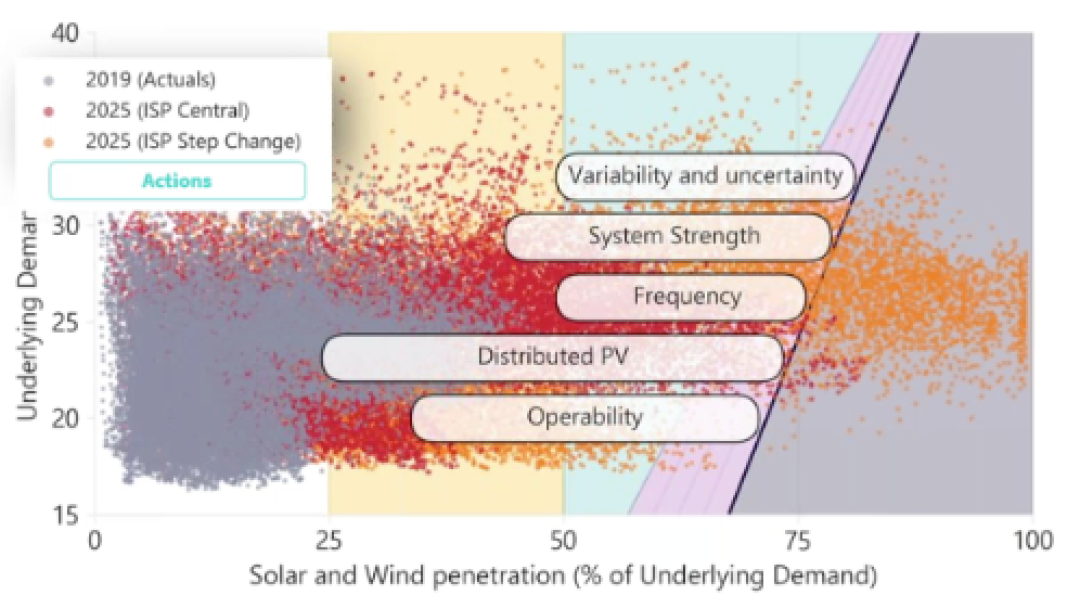 Panel members touched on wider learnings. From a US viewpoint, this included the potential of microgrids in remote locations to join up to the grid in a more flexible manner, and the need for a concerted national cyber security focus on both hardware and software for power electronics and supervisory control and data acquisition (SCADA). The session also highlighted a talent gap in Australia, given that intelligent solutions never emerge without the right people behind them. Industry has seen the workforce for power system engineering hollowed out before the advent of renewables. The next generation of talent needs all the right support, from apprenticeship schemes and university courses to nurturing, inclusive business environments.

Exciting times ahead for clean energy

The future is bright for Australia’s renewable energy sector, yet one burning question remains: who will pay for the transition of the grid system? The prospect of a healthy renewable energy export industry may help, as the world increasingly looks for low-carbon alternatives. Why not import clean energy from one of the sunniest places on the planet, with some of the world’s best wind resources to the south, south east and south west?